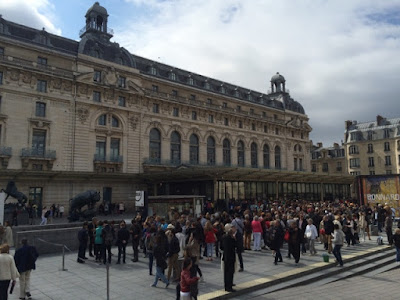 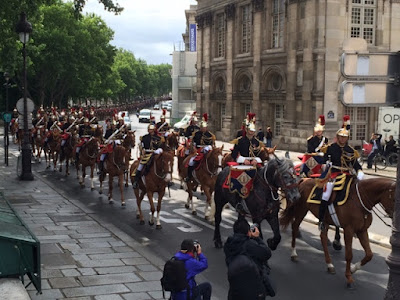 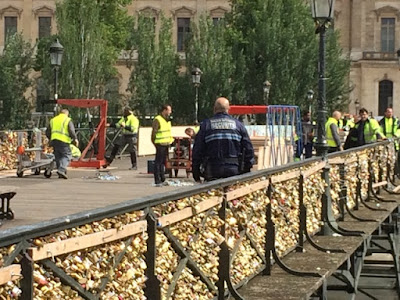 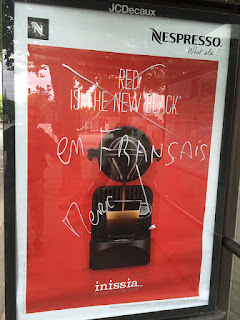 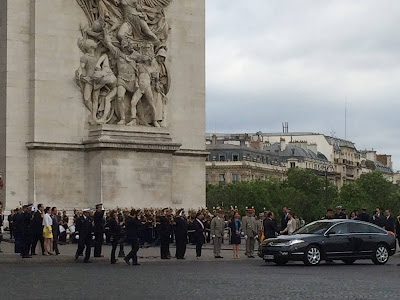 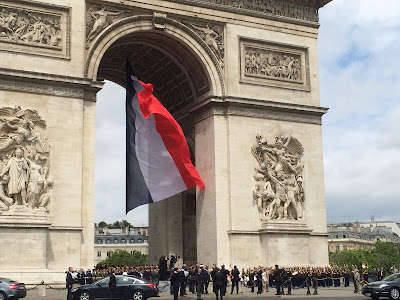 Some more exploring was in the cards yesterday. Just outside the core of Paris is a more modern area of the city called La Defense. Within Paris itself there are no skyscrapers (well there is one) so many are located in this area. Also here is a huge arch that contrasts nicely with the Arc de Triomphe. 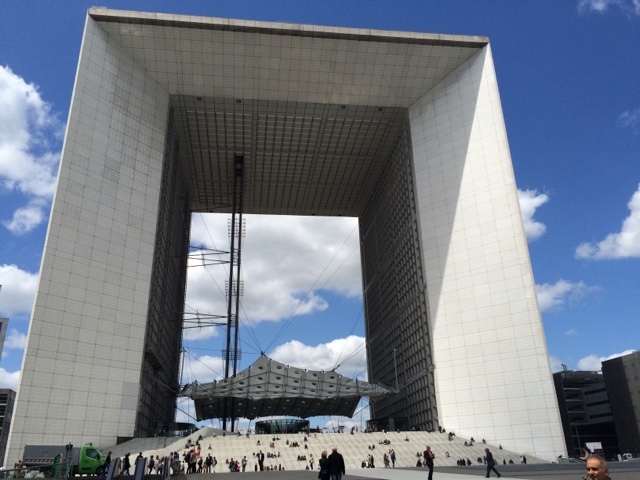 Huge Grande Arche in La Defense
On my way back to the city center I biked through a huge park. At some point I turned a corner and there were numerous ladies of night, all in various stages of undress - even though it was broad daylight at 4p in the afternoon right on the main road through the park. Then about 100 yards away was the most sedate, manicured gardens. In here a policeman blew his whistle at me and furiously told me no bike riding. Of course I thought 'do you have any idea what is going on just around the corner!' 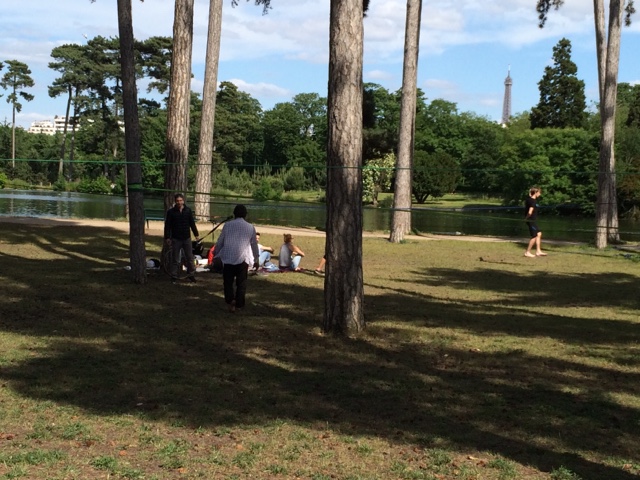 No I didn't take pictures of the other activities in the park! 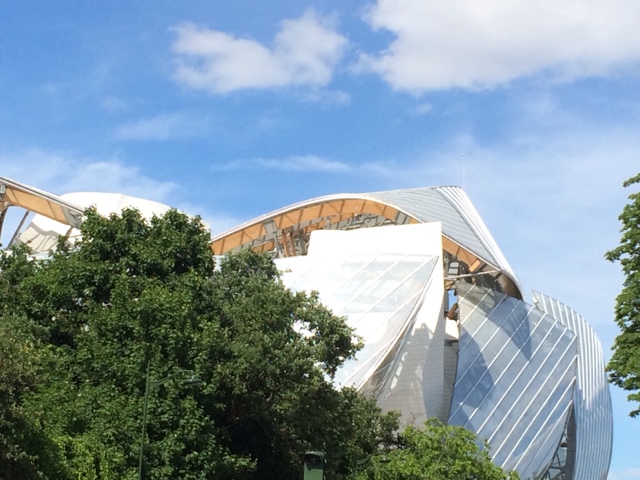 Gorgeous Parsian architecture pops up in the most unexpected places 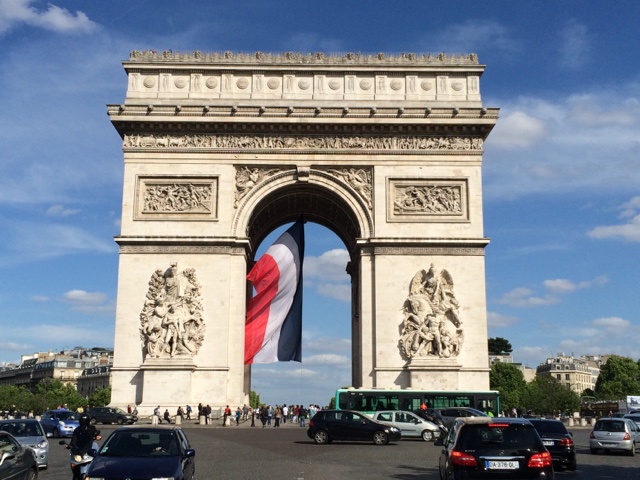 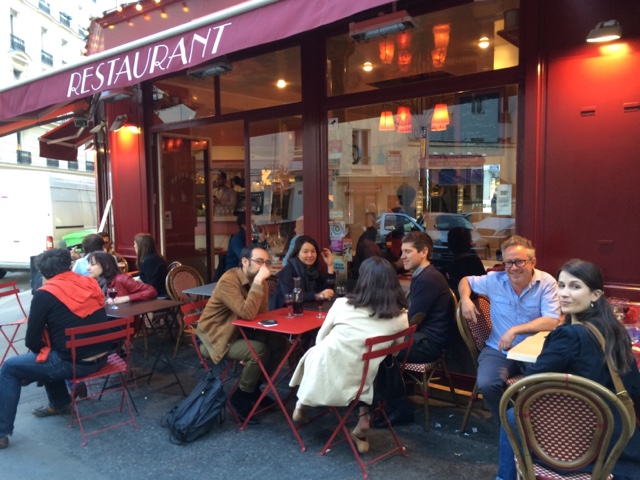 Final dinner with Lonnie and friend Sarah - escargot, roast duck, fois gras, and crime brûlée and a Emile Pernot digestif to end the meal in style.
Posted by Michael at 2:53 AM 3 comments:

The past day or two has been a nice relaxed blend of eating and touring. Yesterday Kev and I went to the Montmartre Museum which is near Lonnie's neighborhood - lots of paintings and history from the revolutionary and Moulin Rouge periods. 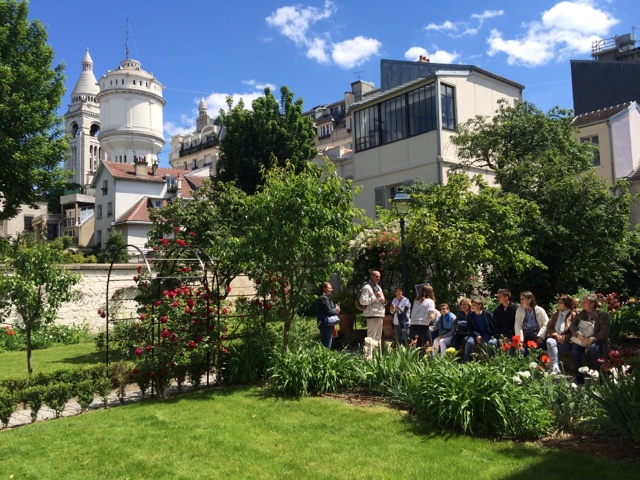 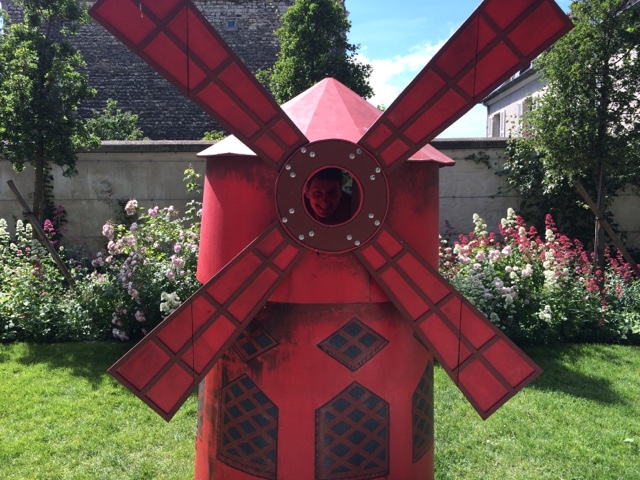 The grounds of Montmartre Museum
And spent quality time shopping and checking out neighborhoods. 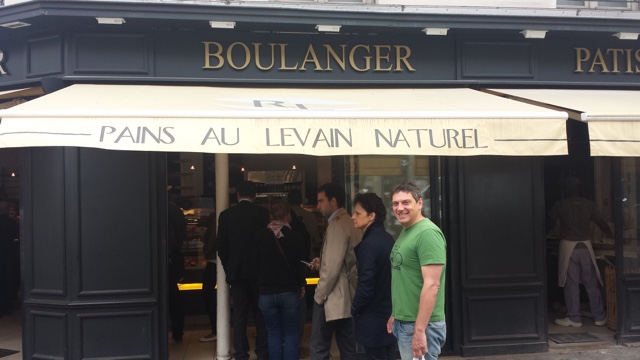 Waiting patiently for a baguette 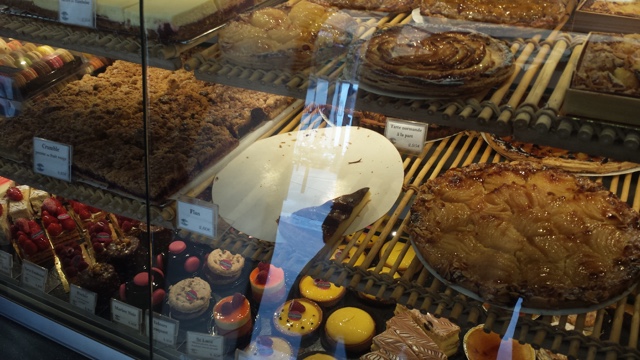 They actually taste as good as they look 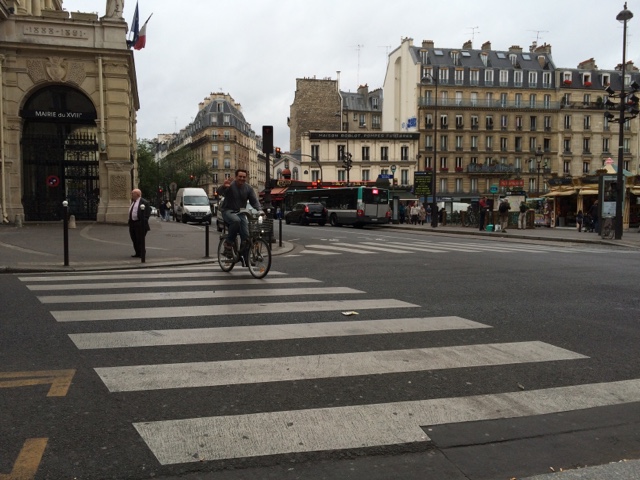 Rented a bike and tooled around the city for a bit 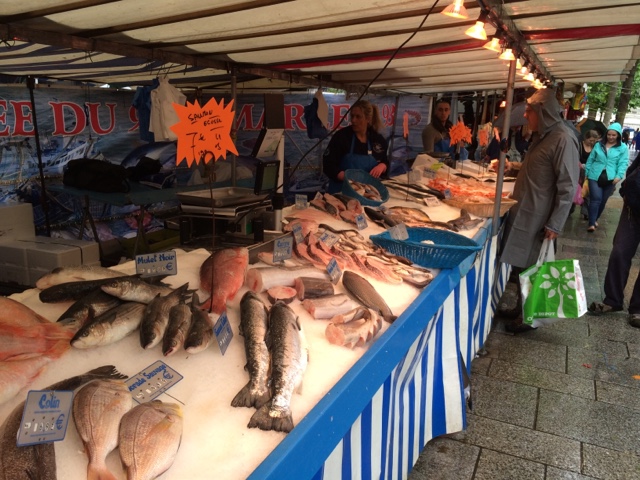 At a Market, Lonnie and I got paella, some Lebanese food, and roast lamb.
Posted by Michael at 9:42 AM 2 comments:

Friends of Lonnie's told us going to an auction house would a neat experience,  so yesterday afternoon we thought we'd check it out. We walked in and felt a bit out of place - most people were dressed to nines but it was a unique experience. At one point we even saw a Renior sold for about 67k euros. There were many different rooms with assorted collectibles  up for auction, from period clothes to furniture to comic books. 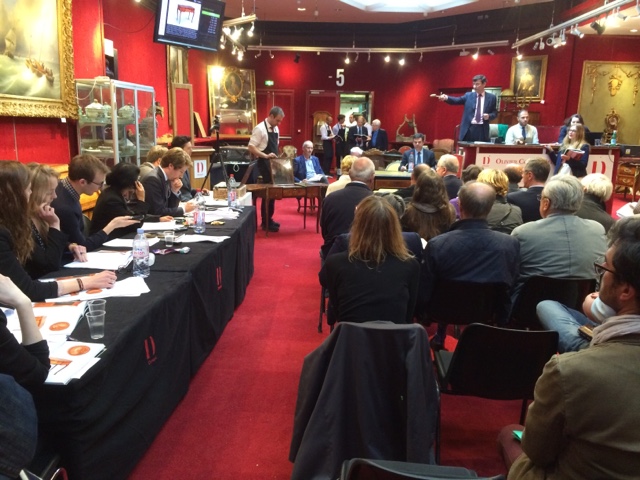 Auction house action
Earlier in the day, Kev and I walked around the neighborhood and checked out the local shops and purchased this nice spread for lunch. 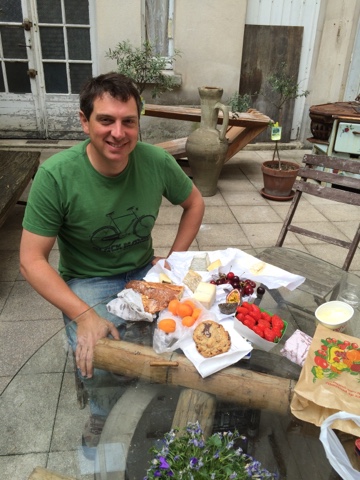 Later we met up with Lonnie and had drinks and dinner with some of his friends. 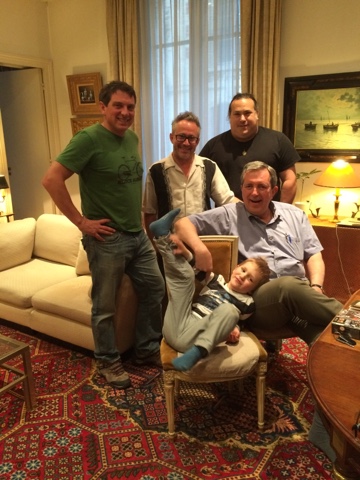 Drinks and foie gras with one of Lonnie's fellow professors 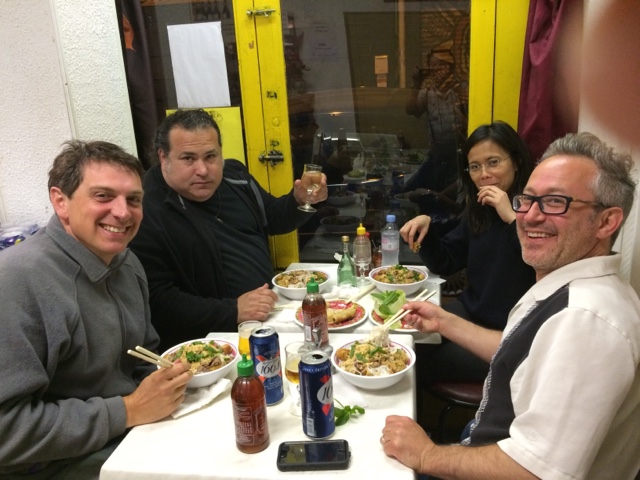 Vietnamese dinner
This morning I got out a bit earlier, rented a bike and found a market to sample and did a bit of exploring. 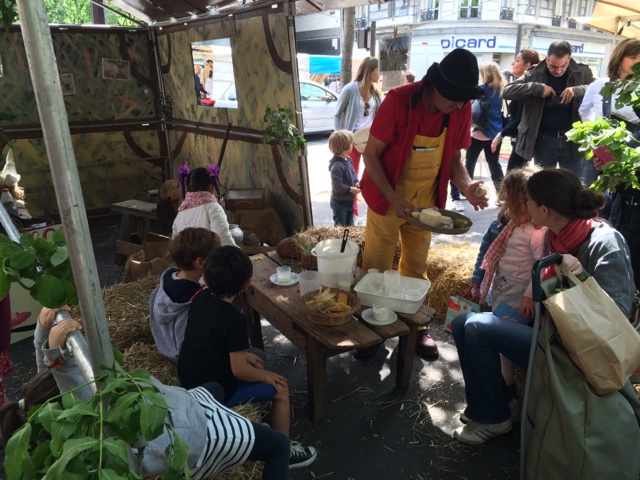 Teaching kids about cheese making at a market 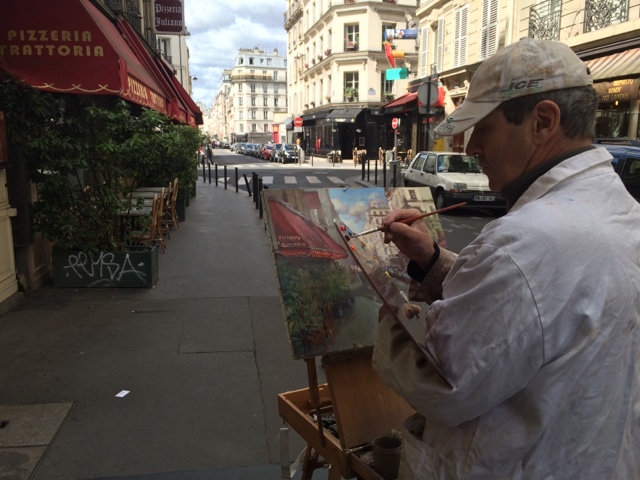 Came across this artist doing his craft
Posted by Michael at 7:29 AM 1 comment: 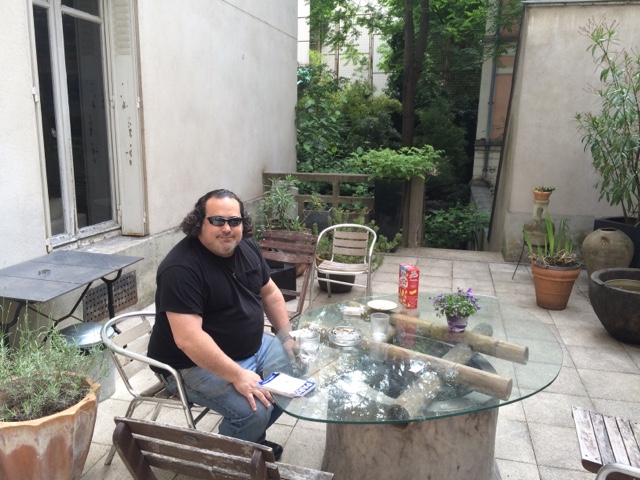 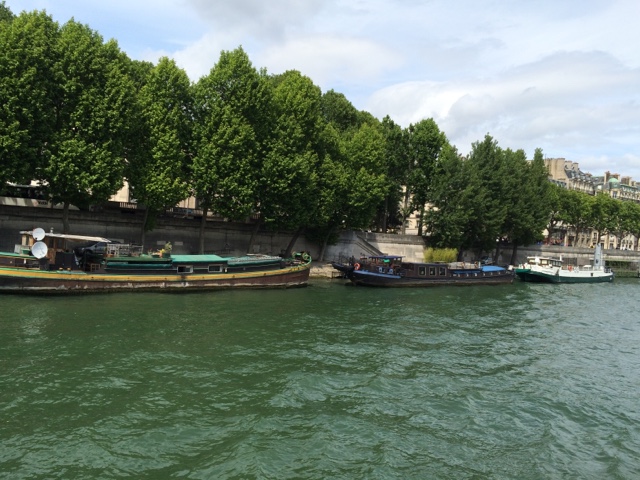 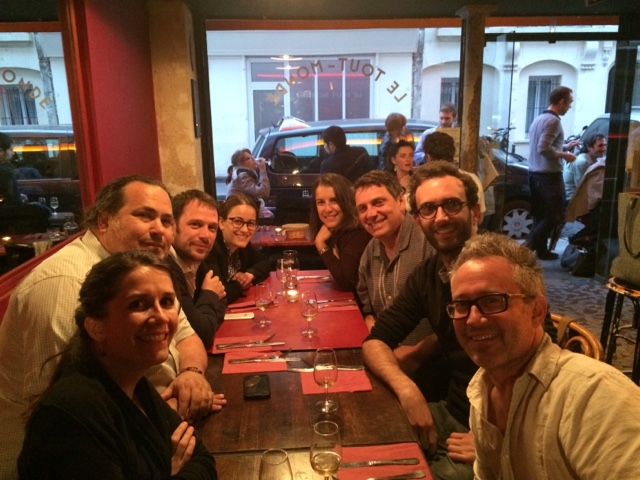 Posted by Michael at 9:17 PM No comments:

Barcelona is probably the biggest city we have been in on our trip and it has been a blast. After being in smaller towns and villages for a couple weeks we've been enjoying the hustle and bustle of Barcelona. A day after we arrived Carole and Stu and Uncle Kenny came - it has been fun seeing them after being away for many months. We departed on Sunday on a Mediterranean cruise.

Posted by Michael at 9:31 AM No comments:

Taking It Easy in Seville

Besides it’s monumental cathedral and vibrant flamenco dancing, Seville is probably best known for its furnace like heat in July and August. Thus we knew we had to take it slow and not run around the city all day. One of the things I love to do in new cities is just walk around and get a feel for the energy and vitality of a place – but with the combination of the heat and two kids with boundless energy for everything EXCEPT walking around cities this was going to be difficult.

Solution for Seville day #1 was to take a sightseeing bus. The kids loved it and we got a sense of the sights and layout of Seville.  Later on we meandered through Seville's gargantuan cathedral.

For Seville we booked an apartment via the Internet with not too much research just a couple weeks ago. We got fairly lucky as the apartment was located right on one of the main plazas of the city. The feel of the neighborhood is just like the East Village, so we felt right at home. The other similarity was the apartment's tiny size– probably about a third of the size of our former place on E 8th Street.


For Day #2 we strolled through the old Jewish Quarter which led to a lot of conversations about being Jewish and its history of persecution. Later in the evening we enjoyed a mesmerizing flamenco show.

On Day #3 we visited the old Spanish royal palace and gardens and then let the kids dictate the rest of the day. Rhonda and I took turns being with the kids and taking off for strolls around the city in the evening.