We made it. We've been in Nairobi for just over 24 hours now, and somehow the world didn't self-destruct. It's always amazed me that you can be sitting in one reality for so long and it's so real, like nothing else exists. Then, you just take one small bend in the road, step off a plane, and your reality is enormously different; The slightly different sensation of the air to your nose that instantly tells you you're somewhere else, the sound of the rugged vans and SUVs honking in the chaotic airport parking lot, the pedestrians walking on the side of the highway while modern commercial buildings light up the night, the beautiful flowering trees set against the brown dirt roads, the random woman walking with a bundle on her head.

And yet, what's the same is just as interesting. Being in a modern city even for just a short time, we've found elements that are familiar and many comforts of home.  Nairobi's street driving is much less chaotic than I'd imagined, having spent time in Delhi, Kathmandu, etc. (albeit years ago, so maybe they're not so chaotic now either).  The fact that everyone speaks English makes everything much easier for us, too - once in a while when we've been confused about something, I remember - "Ah!  We can ask someone!", which wasn't always true even on our most recent visit to France.  And, the apartment my work colleagues found for us is comfortable and pleasant.  The sheets are soft and we've found the right nook for the silver candle holder we'll use on friday nights.

What's most the same is our two beautiful children who pay attention to what's really important - how delicious the mango juice is - that the little basketball hoop from home can be put up on our apartment door low enough for Matthew to "slam dunk" - that the new Dora toothbrush is much better than the perfectly acceptable one Ruby had had before.  They've been amazingly trusting of our decision to do this, despite Matthew's initial upset.  Over the past 24 hours, they've been incredible sports and surprisingly open to their new surroundings.

I've found myself determined as ever to keep a positive attitude for their sake, and it's making all the difference. I'm honest. At bedtime tonight, when Matthew asked whether the doors were locked so that a "bad guy" doesn't come in (something he does at home, too) - I didn't sugar coat anything or say "it's not going to happen, silly".  But, I did speak from the same place of realistic confidence that other expats in Nairobi have done for me.  I explained the many, many things in place we have to protect us:  the wall around our apartment building, the gate that noone can get through unless the security guard lets them in, the fact that we're on the 3rd floor, the regular lock, the deadbolt, the locked metal gate behind THAT, the special crystal stones we brought with us that our dear friends infused with their love and protection, the monkey and cheetah that the same dear friends gave as reminders of their "power animals" (which the kids carry around and hug constantly), and on and on like that.

We talked about how important it is to walk in the world like a powerful, wise warrior - that people sense that in you, and that helps, too.  Back home, I wouldn't have had this conversation, but it seemed right and natural to also explain that "most bad guys want money."  I told him that if I were to ever come across a bad guy, I'd give him my money or my cell phone or my camera or even my car, and he'd most likely go away.  And, that'd be ok because what matters is the people we love, not what we have.  I said it like I meant it, and he wasn't scared - I think it helped him feel comforted actually since he drifted off to sleep peacefully.  And, what's even more amazing is that I DID mean it.

Just a week ago, I got a glimpse into how important it would be for me to focus on being aware and confident, rather than fearful while in Nairobi, but I couldn't quite feel it.  That was before our dear friends held a "protection circle" for our family the friday night before we left - filled with not just wishes for a safe journey and adventure, but affirmations about who we are as people like we have never before experienced and wise reminders about where real protection comes from.  For me, it was an event that will rank up there with just a handful of days that held that kind of meaning, love and power.  Of course, there's also the fact that real life can be much less scarey than an imagination focused on so many unknowns.

There are still many unknowns, but we are taking one step at a time.  My colleagues from my soon-to-be office here have been extraordinarily helpful and welcoming, too. We really did get the royal treatment coming off the plane. The Director, who I've known over the past year (from my most recent position with the same organization), is smart and kind.  She helped us navigate disembarking the plane, immigration, luggage, transport - even holding Matthew's hand when ours were full.  If her schedule allows, she's offerred to take us to the park on sunday to feed bananas to the monkeys.  Amazing.

One step at a time.  Next step is bed for me with a little Melatonin thrown in for jet lag.  I'm hoping to remain patient as we learn the levels and levels of learning in store for us.  We are in Africa afterall.
Posted by Rhonda at 3:36 PM 3 comments: 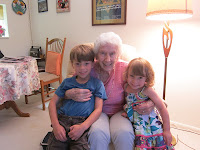 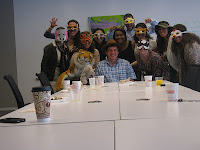 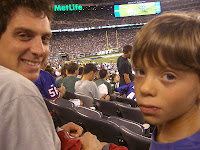 in case people are starting to think about visiting us....

The best of both worlds?

Some say that March offers the best of both worlds, making this the best season for an African safari. Intermittent rains start during this month. Game viewing is excellent over short new grass of the plains. Spring-like conditions are moderated by cool nights and the average daily high temperature is 86 degrees Fahrenheit.

Posted by Michael at 8:33 AM No comments:


Yesterday was my last day in the New York office, and it was packed with hand-over meetings, closing up projects, emotional good-byes over the good and the bad, and all the minutia of leaving a job. Phew. It's been hard to set my sights on what lies ahead while still working in my current position (not to mention caring for two young children on the homefront, fitting in the doctor's appointments, immunizations, shopping, international school searching, etc.). Amidst the back-to-back meetings, I had a one-on-one, in-depth security briefing. It's important, I know, but disconcerting to spend an hour and a half delving into worst case scenarios. Needless to say, without any space or time for decompressing or integrating it all, my heart rate was a bit higher than usual, my nerves were on edge, and I barely slept an hour last night. Sometimes I'm riding the wave of infinite possibility and excitement and other times, I'm scared beyond belief. 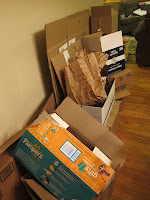 Course, it did help that two dear friends came over with boxes for packing and oils for protection - and an eagerness to help pack. What I really needed was the safety and comfort of good friends. Another reminder of how grateful I am to know such giving, authentic people that make up this community we have come to love. All of the women I've grown close to over the past four years since being pregnant with Ruby really do feel like sisters. One of the best parts of the journey ahead may just be how rich it will feel to come home.

In the morning I was greeted by the heroic efforts of my dear, dear friend, Richie, who's in New York for his yearly return visit from Japan. Early this morning he got a ride, took the Staten Island Ferry to the subway to Grand Central Station, where he took the train to Tarrytown, and then the bus over the bridge to Nyack - all to have a final afternoon together before we both ship off. He came bearing gifts - a book and CD on learning Swahili, a game he made himself with photos of Africana animals, English and Swahili words - truly ingenious (Matthew was rivetted), and an unbelievable openness to following my lead with errands and wall spackling. Richie's been reading up on the culture and customs of Kenya, and he invariably reminds me of the wonderment that could come from this adventure.

This is just a taste of the outpourings of support we have received. Course, there was the sweet call from my cousin, the surprising and heartwarming words from my Uncle "I'm so glad you are living out your dream." We had a send-off dinner party from our neighbors, replete with cake bearing a Kenyan flag, high school friends who journeyed from far and wide to say "good-bye".. it just goes on and on .. I couldn't possibly mention everyone. It's overwhelming. Just so ironic to feel so deeply rooted and nourished where we are, while preparing to leave for a place so far and unfamiliar. But then again, maybe that's why we have the courage for this to begin with.

Somehow tonight the fear's taken a back seat to a very full heart.

Posted by Rhonda at 9:44 PM No comments: