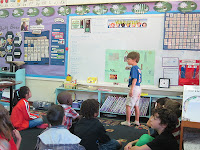 On Monday he gave a presentation to his class on America. Was he nervous? No way, he couldn't wait for the appointed time. Last weekend could not go quickly enough for him since he wanted to show his class all he knew of the USA. Mommy and Daddy were able to watch him show his presentation skills. I wonder if in 2nd grade they move onto to Powerpoint!?!

The first part is some clips from his practice run - then the real deal... 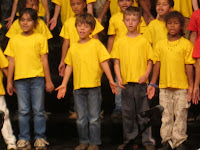 Next day was the school's spring time concert. Matthew was in the front and center singing and dancing...


This weekend has been filled with birthday parties for Matthew's buddies, so when Ruby came into the bedroom at 6:30a holding her Highlights magazine and pointing to a recipe/picture of apple with oatmeal and declaring that's what she wants for breakfast -- how could I resist???  Problem is no apples in the house and no car to get them -- only solution was for a morning walk to Nakumatt.  So we rounded up a groggy Matthew and charged out for some morning exercise.  2 hours later the troops were happy! 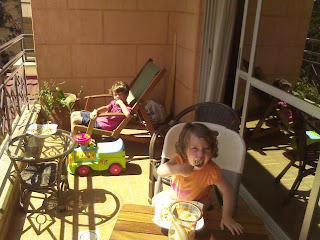 Posted by Michael at 5:37 AM No comments: 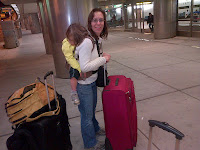 Posted by Rhonda at 5:00 PM No comments:

for a father/son weekend, that's why!  Water parks, indoor skiing, camel rides - perfect!  Momma and daughter are in the states so the boys needed to do something exciting!


Matthew was the perfect travel mate. He didn’t seem to mind one bit that there was no rest for the weary– we packed a ton of things in and he came back wanting more!


After a stopover to change plans in Addis Ababa we arrived in Dubai at 3am – by the time we got through passport control, found a taxi and got to the hotel it was 4am. Right to sleep we went since Saturday was going to be packed.


Saturday morning we bounced out of bed and headed straight for the Aquaventure water park near the Atlantis hotel. The whole complex (hotel, water park, residences, etc) are built on man-made islands out in the Persian Gulf. Right away we jumped on as many cooling water rides as possible. It was great fun floating down a lazy river, riding inner tubes on some rapids, and even sliding down some slides in the children’s play area. Matthew even let me do the “Leap of Faith” water slide (water jump is probably a more apropos name!).
We didn’t stay at the park the whole day though – it was time to see the city. We got a cab and went to the downtown area.


On the way Matthew took a power nap in the taxi which would be a key move for later in the night.

﻿
After walking through some souks (markets) and a quick bite to eat on the waterfront we ventured on a dhow (boat) to the other side and more souks (textile, gold, spice, and food).


As an aside, while walking to the gold and spice markets we noticed all these ships and docks leaden down with many different types of goods (tires, refrigerators, steel, etc). I couldn't help but ask someone where the stuff was going - since most shipments by sea these days is via containers. The stevedores confirmed it was all headed for Iran.  Hmmm - I thought there was trade embargo...  But it was neat to see a non-glitzy, real world side of Dubai.﻿﻿﻿﻿﻿﻿
﻿﻿﻿﻿
﻿﻿


By this time it was already 8:30pm or so. Instead of a boring taxi ride back to the hotel we decided to try the metro. It was very efficient, clean, and organized.

On the way back to the hotel I mentioned we should look out the window for the tallest building in the world. Burj Khalifa. But that wasn’t good enough for Mr Matthew – he wanted to see it up close. I said aren’t you tired – NO was the adamant reply. So off we got and ventured to it. We had a great time seeing it in all its height. They have a magnificent water show at the base too.
Next to the building is also the Dubai Mall (suppossedly the biggest mall in the world) - probably the most interesting thing was seeing the Dubai menfolk - many of them were dressed in the traditional Arab garb of long flowing white robes with headdresses.  They looked so elegant.
By midnight we were back at the hotel - phew!
Sunday was our ski day. 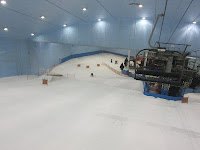 Skiing was great fun.  2 hours was just right. They supplied us with everything, boots, skis, parkas - we just had to bring the gloves and hats.  I got some good turns in, by the time 2 hours was up Matthew was flying down the hill.  Daddy was proud. 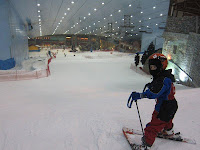 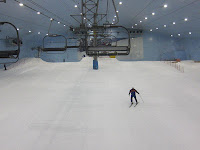 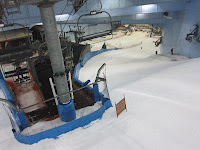 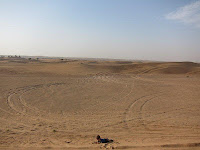 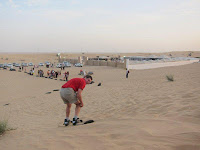 In the afternoon we went on a desert safari.  Matthew had a ball playing in the dunes.  I did a little sandboarding and we rode camels.  The real thrill was a 4X4 drive over the dunes - a couple times we were certain we were going to flip.  Afterwards there was dinner in the desert. 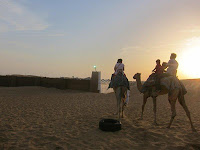 ﻿﻿﻿Monday morning we needed to hit one more water park before our flight home.  Matthew was super proud of his ride on the Jumeirah Sceirah. It was 11 stories high. They put you into a tube, lock it up, and then the floor drops out!
It was also interesting to point out that since we were in an Islamic country there were many signs pointing out the need for decorum. No PDA (public displays of affection), etc.  But at the waterparks women still wore bikinis - but not the Arab women - they have something just for them - the veilkini, no kidding... 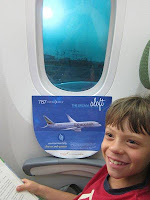 On our flight home I got a thrill - we were lucky enough to be on the brand new Dreamliner.  Last week it was just put back into service - I'm pretty sure the one we were on is the only one flying right now. It's a gorgeous aircraft.﻿ 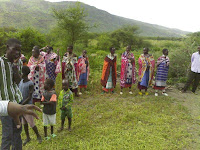 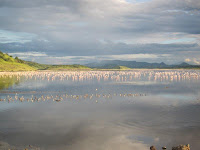 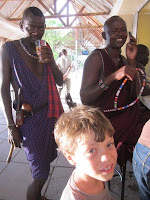 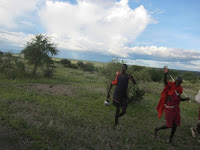 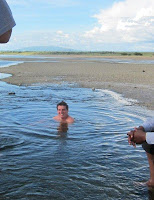 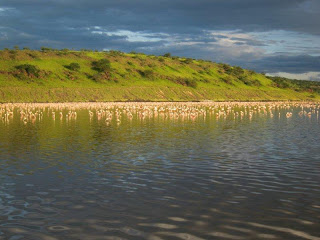 It was a long drive back to Nairobi but at least we weren't driving! The night sky was alive with tons of stars and a bright Milky Way.  Seems everyone in the group had a good time and it was nice to do the tour through the NGO and not have the profits go to some random tour company.
Posted by Michael at 3:44 PM No comments: