The helicopters continue overhead.  The reality of what's happened at Westgate is now setting in. We got back to Nairobi sunday around 2pm, and it was strange how normal the streets of Nairobi seemed to be. But, yesterday afternoon we got messages from the children's schools, the embassy, etc - more details of who amongst the classmates or expat community are injured, missing or dead. We're now getting more details of exactly what happened saturday inside that mall that we frequent probably close to once a week - usually on weekends. Now, the enormity of what's actually transpired is becoming clearer.  Michael and I are somber and concerned. Not so much for our immediate personal safety - just a bit stunned by how easily that could've been us, scrambling to hide inside the Nakumatt store or sheltering our children from gunshots.

A fourth grader from ISK (Matthew's school) was injured after sustaining two gunshot wounds in the leg. Last we heard her mother and brother were missing. I found out an hour ago that they were found dead.  My colleague/friend from work - one of the only other Americans at my office with two young children - was caught inside and apparently went into hiding inside Nakumatt with his family. Somehow they escaped and got out saturday afternoon.  Now that I've read accounts of what exactly happened in there, I've extended another offer of support for soup or company - he hasn't taken me up on that just yet. I remain concerned about how they're really doing.

We've received a directive to "shelter-in-place" and so we have. My office is closed today. Only essential personnel are to report to the Embassy. Even though the schools are open, the situation outside seems to be very tense, and we live so close to Westgate - we kept them home with us today. One of my big fears would be getting separated from the children, and I'm glad they're here now.

Despite everything, they seem ok with it all.. they have some idea that something's happening. Until today they still thought it was a robbery (Ruby may still).  But, then it dawned on me that Matthew will be back at school and talking to all kinds of kids and counselors will be doing interventions, etc, I wanted him to know it's a bigger deal than that. He said he doesn't understand why the robbers are still inside because he thought robbers just want money. I spared him the details, but let him know it wasn't just a robbery, many people were hurt (including that 4th grader), some died, and the Kenyan army, the U.S. and Israel are all here to help - that's what those helicopters are about.  He seemed happy enough with that, and has been busily playing all day with Ruby.  No more information needed, I think - unless he asks me questions.  We'll see how the week goes.

In some ways having lived through 9-1-1 does help. But, I never went to the WTC. This feels much closer to home - we could've been there - 50/50 chance. And, there weren't hostages and an ongoing tense situation after the initial attacks in New York. All of Kenya feels it, I know. It's a horribly, horribly sad time. We just want it to end now. Continuing prayers go out for the people still trapped inside.
Posted by Rhonda at 6:26 AM 2 comments:

Nairobi attack and us

Very sad weekend here in Nairobi that continues. First and most importantly we are all fine. We were actually out of town, four hours away at a game park. In a way we are grateful this happened on a weekend as we were all together and didn't have to worry where each other and the kids were.

We had just sat down for lunch when Rhonda got some texts from co-workers giving us a heads up. First it seemed it was an armed robbery but over the next hour it became clear this was much more.

The attack happened at the Westgate Mall that we go to all the time. The images really hit home since we can picture ourselves in the exact places the photos and videos were taken.

The mall itself is only about a mile from our apartment. As a write this I hear the helicopters circling overheard and have heard a couple explosions. It is very surreal to be living this. We really don't feel unsafe though since we are behind gates with security guards at the ready.
The kids had lots of questions at first but over the past day they have moved onto more important subjects for them, like playing with friends and making a board game. Good to know they are so resilient.

While it was shocking to hear this happened, it really shouldn't come as too much of a surprise. Back almost two years ago the group behind the attack warned this would occur and the US government has had an on-going warning. Just in our everyday life you don't feel an imminent threat. We were much more concerned about random robberies. But for the most part our life here is fairly easy - short commutes, great weather year-round, kids happy in school, and household help, so it's easy to put into the back of your mind a seemingly existential threat.

Besides the senseless violence I have been worried about the impact this will have on the Kenyan tourist economy. We have met many Kenyans who rely on visitors for their livelihood and I know this will have a serious impact. At the resort we were at this weekend I could feel the concern in the worker's faces.

As mentioned we weren't even in Nairobi when this happened. We had planned a short weekend visit to Sweetwaters - a tented camp in the shadow of Mt. Kenya in a conservatory called Ol Pejeta. It was a nice place with warthogs, gazelles, and rhinos right outside the camp. Also nearby is a chimpanzee sanctuary. We were so amazed by these creatures that we went twice.

Posted by Michael at 2:50 PM No comments: 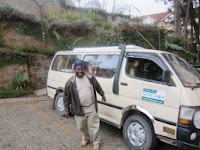 After our return from the Mara, we bid adieu to our most resilient, patient, and all around rock star of a driver - Sammy. He took us over many miles of bumpy, dust filled roads and never, ever lost his smile or sense of humor.

Rhonda, the kids, Richie and Way then had a quick break for laundry and email checking before heading out for Lamu, on the Indian coast. After many days on the road, this part of the trip would be a welcome change, maybe best of all because Lamu is a car-free island, so no more days in the van!


While the rest of the crew got a head's start, I stayed in Nairobi for a couple days to earn some money to pay for all this fun! (mostly kidding, I'm definitely 2nd fiddle in the earning dept these days!) A couple days later I joined up with everyone.

Richie stayed in Lamu Town, which is the main town on the island.

﻿
Way and the Schutzbank/Fleischer clan stayed in Shela which is a smaller town on the same island, but only a short boat/walk away.

The first couple days were spent enjoying the beach, touring the town, and generally relaxing and taking in the spirit of the coast.﻿


At the far end of the island just past Shela - the beach curves to face the Indian ocean and continues for about 9 miles. The sand dunes are as high as hills. 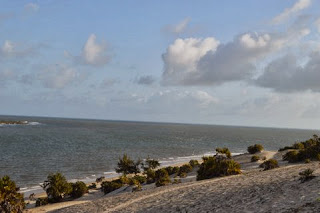 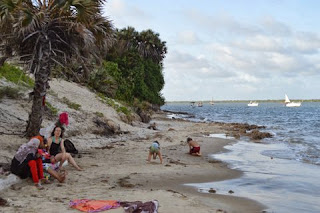 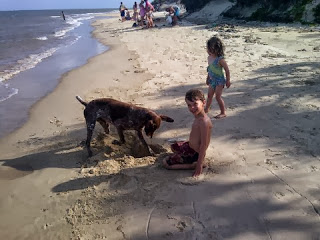 The first couple days we were in Lamu was Ramadan, at the conclusion we joined in the celebrations which included children's games.

In Shela we stayed at Banana House. Rhonda was able to negotiate adjoining rooms for the kids and us on the ground floor. Outside our rooms was a relaxing hang-out space filled with pillows and they served us breakfast there. It was nice to take naps while the kids ran back and forth to the pool. One night the B&B served a scrumptious Swahili dinner in the courtyard.
Our last full day we hired a dhow for a trip to some of the islands surrounding the bay. It was amazing to float from isle to isle , try some fishing, & explore the coves. The shipmates grilled us a lunch of freshly caught fish and coconut rice - yum! 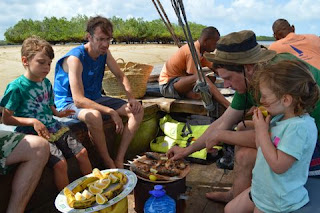 ﻿﻿﻿﻿﻿In the afternoon we toured around an abandoned village from the 15th century on one of the islands﻿﻿﻿﻿ before sailing back to Lamu.
What a great way to end an unforgettable 2 week journey around Kenya. Before we knew it, we were back in Nairobi and Matthew started 2nd grade, Ruby started Kindergarten, Rhonda and I were back at work, Way flew to Europe for a grand tour of the continent, and Richie headed back to Japan.

Kericho and then animals galore!

After the Nandi Hills we drove down through sugar cane fields and then back up to our next stop - Kericho. The sugar cane grows at a lower altitude while tea grows at a higher one. In town we stayed at the Tea Hotel. Seems it was built in the early '50's and it has not seen one iota of renovation since. But still you can appreciate the grandeur of what it once was. The outside was gorgeous with lovely gardens and tea plantations in the distance.
﻿
﻿
The next﻿ day we continued onto the Mara, half the ride was on fairly smooth roads and the second half was horrid.
But when we got to our cabin overlooking the Mara - Matthew and Ruby spotted giraffes right away... 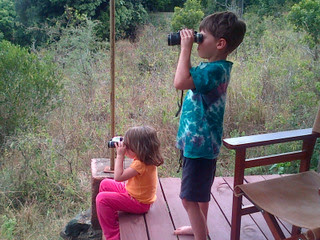 what they were watching... 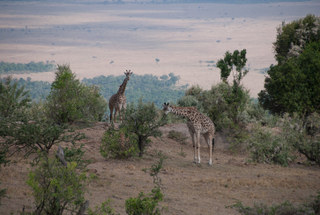 Matthew and Ruby enjoyed trying to make an extra buck to try and offset our expenses.


After a couple safaris so far in Kenya we were finally able to see cheetahs - Matthew's favorite animal. 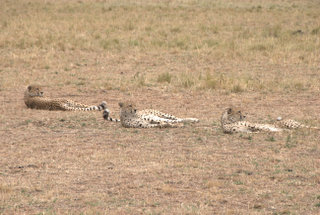 One of the highlights of the trip was seeing the wildebeest migration.


As for the actual Mara River crossing, the first day tried our patience as you have to wait until they decide to brave the river. We waited for many hours with dozens of other safari vehicles. 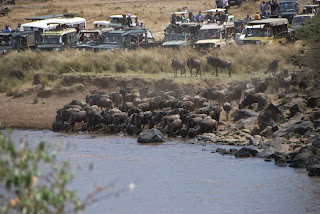 But then they went! We cheered them on like it was a football game! 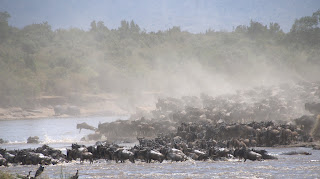 We were very happy 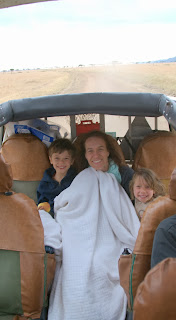 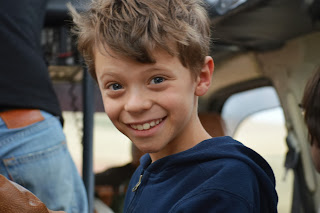 Later on we saw a couple gruesome scenes... 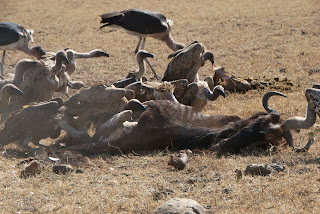 Coming across 25+ giraffes ambling across the landscape made for a more serene experience, 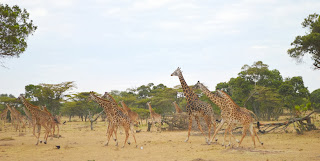 The warthogs were also a favorite. 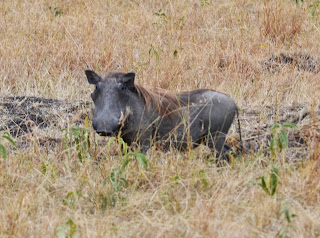 After these couple days in the Mara we headed back to Nairobi for a quick rest before the beach... 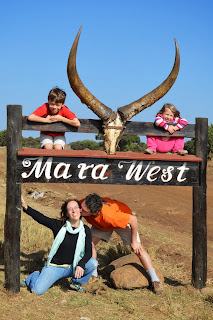 Posted by Michael at 9:41 PM No comments: