Oma and Opa take on Kenya!


Where we last left off, Oma and Opa had just arrived and we were taking it easy on them.  Well, like the last post previewed, we did start to get deeper into Kenya very quickly.  The next day after the last post, we decided to visit the Railway Museum in downtown Nairobi.

Kenya being Kenya, things got off track.  Our taxi driver did not know the exact location and proceeded to go to a section of the rail yard across from the museum.  To go back to the correct place meant that we would have had to sit in at least 30 min of traffic - so I, in my infinite wisdom, made the executive decision to walk down the major thoroughfare and then through a couple of back alleys to get us where we needed to be. 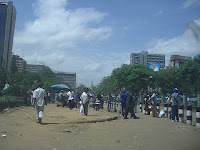 Of course I thought it was a pretty interesting experience, Oma and Opa might have a different opinion!

The Railway Museum, was a big winner though.  I think we all had a good time.  The history part was very interesting and the kids loved climbing all aboard the locomotives and rail cars.  Even Oma joined in the fun! 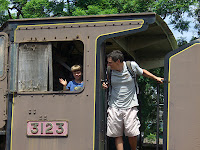 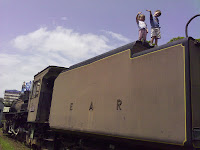 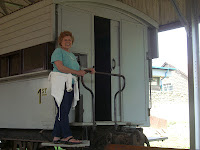 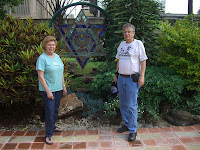 Next stop was lunch at Nairobi Java House, a pleasant cafe downtown, and then we walked over to the synagogue.  We were supposed to be able to take a walk on the grounds and see the sanctuary.  But somehow signals got crossed and the caretaker and manager were not available.  After much back and forth, we were able to gain entrance and at least tour the grounds and see the gorgeous setting of the synagogue. 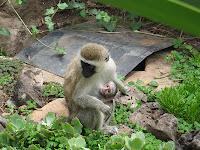 Next up was a weekend trip to Amboseli.  We hired a safari van and it took about four hours to get to the park. We stayed in a beautiful hotel called Serena and were greeted upon arrival by monkeys! 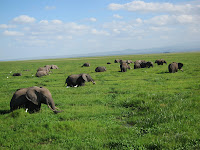 On our first game drive we saw hippos and lots of elephants and lovely views of Kilimanjaro. 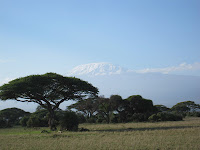 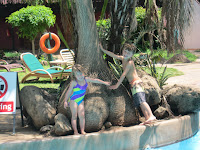 The hotel had a great pool that the kids loved (the 'toushy steak' tree was a big hit!) and buffets for breakfast, lunch and dinner.  We were so stuffed!  The one negative was that since it was a very wet rainy season in Kenya, many of the animals (other than elephants) were scare since there was so much food in abundance.  On safari it is better when the area is dry because then the game congregates around the waterholes and it is easier to see them. 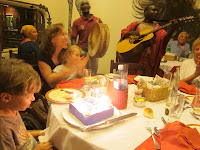 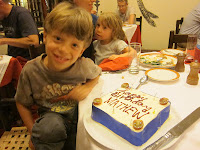 Also, during our stay in Amboseli, it was Matthew's birthday and the restaurant staff made it memorable.  They all sang, drummed, and played guitar to a Kenyan birthday song and then did the traditional American one. It was very sweet, Matthew might have been a little intimidated by the attention, but it was surely a moment that won't soon be forgotten.

This past Monday, after returning to Nairobi, we took a day trip to the Ngong Hills (famous for the opening passage/scene in Out of Africa, "I had a farm in Africa at the foot of the Ngong Hills").  It was very dicey organizing and getting there.  All the guide books recommend that you stop at the police station in the nearest town to arrange for armed guards to accompany you.  I have read different reasons for the guards, bandits and/or buffalo.  After about 30 minutes at the police station trying to explain and wait for the escort, we were off.  Of course our driver went the wrong way for about 20 minutes and we had to back track, but once we got there -- wow, it was like being on the edge of the world. 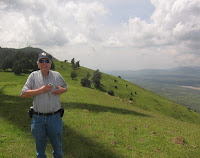 We hiked for about an hour and enjoyed an impromptu picnic overlooking the Rift Valley on one side and metro Nairobi on the other. 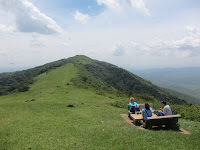 Ruby even got to play goat herder. 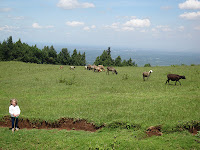 Afterwards we went to the Kazuri Bead Factory. Rhonda and Oma did some serious shopping while Opa chatted with the drivers. 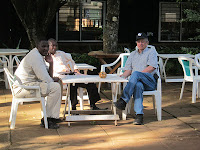 Tuesday was back to work day for Rhonda. The rest of us (minus Matthew who is back in school) had a busy day.  We returned to downtown so Oma could try her hand at bargaining in the market for souvenirs - I was impressed - she actually got a necklace for less than her original price!  We also finally made it into the synagogue building and had a nice talk with the lady who manages the congregation and heard the history of the Jewish community in Nairobi. 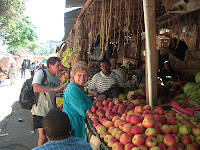 On the way back home we stopped at a local fruit & vegetable market and bought carrots, cucumbers, pineapples, oranges, broccoli, and mangoes.


By the end of the day Ruby was wiped out and took a nap on Opa: 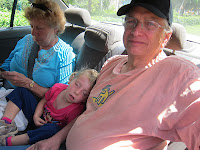 Since Amboseli only whetted our appetite for seeing safari animals, we decided to take a shot at Nairobi National Park on Wednesday.  The park is right outside of town and we arrived in less than 40 minutes from our apartment. 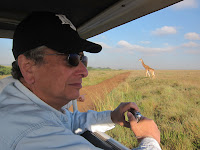 We had a lot of luck and saw a lion stroll right past our safari van.  We also saw over a dozen giraffes and untold amounts of zebras, gazelles, elands, hartebeests, impalas, and wildebeests.  Off in the distance we also saw three rhinos and closeups of various odd cats and canines like a jackal and an aardwolf. 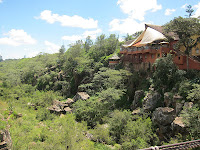 We then exited the park around lunch time and stopped by a cliff side inn called Rolf's for a scrumptious lunch.  Oma and Opa said the wiener schnitzel was the best they had had since being in Germany in the service 45+ years ago.


Next stop was Kitengela Glass Company.  Rhonda had visited last year when she was in Nairobi for work and came back raving about it.  As a consequence, it was top on Matthew's list of places to visit.  While Oma and Opa bounced along some truly awful roads to get there, the kids and I took a short cut through goat and sheep fields. 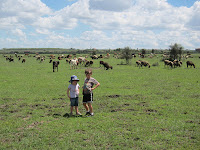 Upon arrival it did not disappoint. The kids had a ball right from the driveway with the all the interesting sights and props. 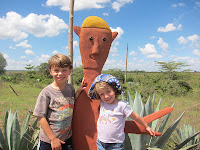 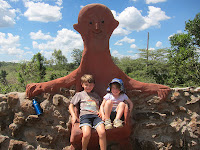 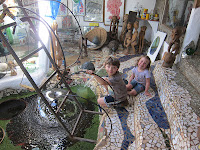 Then they got to watch glass being made and shaped. 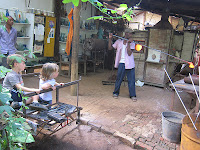 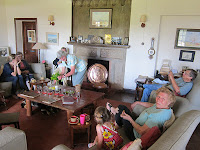 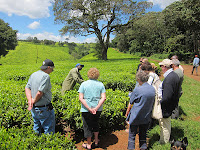 Today we (Oma, Opa, Ruby, and me) took a road trip out of town to the Kiambethu Tea Farm.  The farm is set in spectacular surroundings with the nearby hills bright green with tea bushes.  The 3rd generation settler spoke about the history of tea farming and its production in Kenya while we enjoyed tea and cookies.  After a walk through the fields, we had a gourmet lunch in the garden. We all left with big smiles on our faces!

Tomorrow we take a early morning flight to the coast for some beach time!  I'll need it as I got an offer from my previous employer to start work later this month. I need to make a decision on whether to accept or not next week.
Posted by Michael at 6:27 PM