Onward to the Cherangani Hills and Kakamega

﻿
After a pleasant overnight outside of Eldoret we braced ourselves for another long day of driving through western Kenya to Marich Field Studies Centre.  The drive through the Cherangani Hills was gorgeous - dark green hillsides until we passed over the peaks and then becoming drier as we dropped down to the valley floor.

We stayed at Marich for two nights - it was very basic.  Just some beds in a round hut and very simple meals.

The original idea was to hike in the hills from one village to another - but after two days in the van none of us could bare to go back in it again, we needed a break. As it turns out we didn't have a choice since the engine fan broke and Sammy had to take drive back to civilization to get it fixed and then turn around again and come back. I couldn't imagine traveling that road in my life again let alone twice in two days! 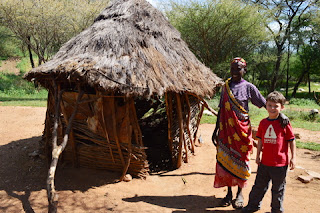 ﻿For our full day there we hired a guide and took a couple hours hike from the centre through the surrounding countryside to meet some locals, see their village, and enjoy the scenery.


﻿﻿﻿﻿﻿﻿﻿﻿Luckily, Sammy made it back and we left early Tuesday morning July 30th for the Kakamega Forest.  Here we stayed in more very basic accomodations.  It was very homey though as the caretaker made us a nice dinner and we went to sleep early as we had hired a guide for an early hike through the rain forest.
sounds of Kakamega:
Posted by Michael at 4:40 PM