Weekends and Holidays in Kenya

Happy Holidays and Merry Christmas to all.  With the kids off from school and holidays providing some days off, we've been able to get around a bit and see some interesting stuff. 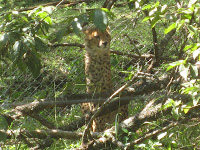 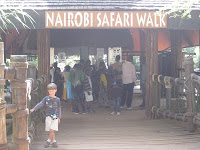 Last weekend we went to the Nairobi Safari Walk.  Finally Matthew was able to see his favorite animal - a cheetah.  It was a fun time, they have a boardwalk and path that takes you near various animals: rhinos, giraffes, ostriches, lions, etc.  It was similar to a zoo experience back in the US but with baboons being your host!  They were just walking around like they owned the place. 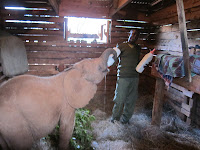 Afterwards we went back to the elephant orphanage we visited our first week in August.  I had been very hesitant to go back since we had horrible traffic back then.  But we were already halfway there, so we gave it a shot.  No issues this time :) , we were actually early.  For this visit we were going to adopt a baby elephant!  Before choosing which one, we got to see the little guys coming back from their day in the bush.  Then we picked which one we thought was the cutest to foster.  The unanimous choice was Barsilinga. 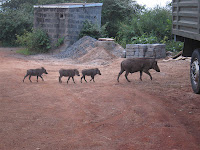 We also enjoyed seeing a warthog family dart around the complex. 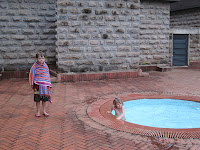 Other recent days have been spent lounging around the pool, me going on bike rides, having some of the kids' friends come over for play dates, and last Friday we had a family over for shabbat dinner.  They are Israeli and it was interesting to get their perspective on the recent troubles there and their view of the American political system.

Yesterday for Christmas we decided to take a road trip to a large waterfall  - Fourteen Falls - about 2 hours north of Nairobi.  It was a real local's experience as we didn't see any other mzungu all day.  On the route we also traveled along Kenya's only western type super highway.  The remarkable thing is that as you are traveling along at 55mph there are speed bumps which force a sudden stop right in the middle of the highway to allow residents and donkeys to cross.  Very strange, but supposedly they are temporary until they finish pedestrian overpasses. 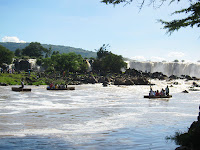 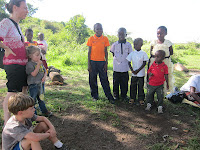 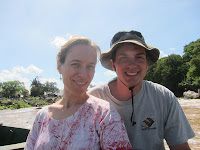 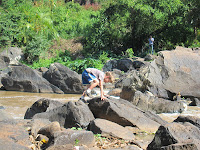 The falls were a nice experience - Rhonda says more from a cultural than a scenic one!  There was lots of garbage all over, and it smelled terrible.  It is undetermined if the smell was from the resident goats, garbage, the rotting vegetation, or some combination!  It was fun though to clamber over the rocks, take a boat ride and see and meet Kenyans enjoying a Christmas outing. 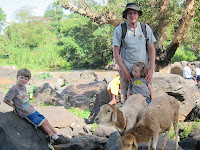 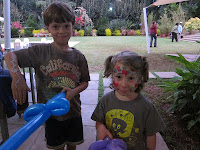 Upon our return to Nairobi we had dinner at a restaurant, Zen Garden.  It was relaxing since, as typical with many of the nicer places in town, there are large play areas and activities for kids to get their ya-yas out.

Matthew and Ruby accomplished their "mission" to get their faces painted and sword-shaped balloons all by themselves, while mom and dad enjoyed a cold Tusker.