Couple days ago we (or should I say I, since Rhonda is still in the states) had our first visitors.  A friend of mine from work from many years ago, Joe, was passing through Nairobi after a safari and beach holiday.  He came with his wife and another couple.  I think they might have been a bit horrified with the traffic in Nairobi (at least an hour from the airport to the city center and then almost two hours to get from downtown to the restaurant).  I met them downtown in an outdoor pub.  I got there about 30 minutes before them and this being Nairobi, me being alone, and drinking a Tusker, and of course a working lady asked if I wanted company ... AHHH!  Can't say that has ever happened before, but I was forewarned this would (not might) happen but still not so typical in the states!

Anyway I digress, they arrived, we shared some drinks, heard about their wonderful safari in the Serengeti and coast time in Zanzibar, and in the end it was a nice way to experience the city.  We then ventured to the City Market where they accost you with hard-core efforts to view their souvenirs, trinkets, etc.  It's very intense, seems like if the shop owners would just chill people would not have the tendency to flee, but after just 10 minutes of shopping you want to run out since it is so overwhelming.  We then jumped in a cab to go for Ethiopian food.  I had never had it before, so was looking forward.  I think our reservation was for 6:30 and with all the traffic we didn't arrive to just before 8pm.  Honestly I was expecting the bad traffic but even our driver said this was worse than normal -- seems the matatus had gone on strike and everything around the city was clogged. 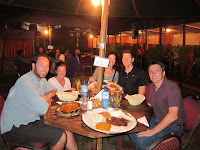 Happy to report the food was great and also reasonably priced, if not downright cheap - the five of us ate a ton and had lots left over.  Including drinks it came to about $60.  I tried this drink called honey wine - it was wonderful, served in a little beaker type glass with aluminum foil over the top.  Turns out it is fermented right in the bottle, I guess it is really mead.

For anyone thinking of visiting, Joe said Africa was his best vacation ever.  He raved about the Serengeti and Zanzibar.  Just a little a plug to get some of ya'll over here!