I think it was four weeks ago now that Matthew and I went on a bike ride. We were excited to check out the area surrounding our compound and explore a little.  There was even a big hill around the block that look enticing for a little beginning mountain biking.  Things were going well, Matthew was doing great on just two wheels (we just recently took off the training wheels), I even heard a big wahoo! as he took trip #1 down the hill - but alas on trip #2 things did not go so well.  Unfortunately he hit a rock or a stick and went right over the handlebars. It was pretty bad, his lip was cut up, blood was pouring out, and his big, fancy grown up front tooth was pushed back.  It was very intense, as of course he was screaming for very good reason. Lots of strangers stopped by to offer assistance but there was nothing anyone could do really. Luckily Rhonda was home and she came right over with the truck and we made a beeline to the hospital.  Poor Ruby too, as she was in the middle of a fun play date with her friend from school.

By the time we got to the hospital the bleeding subsided and the crying mellowed out but what would be next?  Could the tooth be saved, would Matthew have a scar forever, would he ever trust Daddy to take him bike riding again? After a look-over at the hospital it was determined Matthew needed to go to another hospital for an special mouth/face x-ray so they could figure out next steps. We got that done and returned to hospital #1 (Gertrude's in case anyone is interested) and waited for a doctor.  The maxillofacial specialist, Dr. Akama, did the examination and he was wonderful - even so much that he and Matthew shared a first name!  That had to be a good omen.  He told us Matthew would need surgery later that day to bond the loose tooth to a stable one and, in order to do the surgery, Matthew would need general anesthesia - eeshh!  All for a stupid bike ride.  Many hours later - probably after 9pm Matthew went into surgery - the whole day since the accident he couldn't even eat or drink anything - I don't know how he did it. It was truly heart wrenching to be sitting outside the theater (that is what they call operating rooms in Kenya) waiting to hear word of how it went.  About 45 minutes later the doctor came out and told us to great relief everything looked good.  We were thankful in so many ways. By then it was probably 11pm and boy were we exhausted - I was still wearing the same blood-stained clothes from the mishap and we all crowded into Matthew's hospital room and tried to get some rest.
﻿


The next day Matthew was discharged and we scheduled  follow-up appointments with the doctor for the next couple weeks.  In the meantime Matthew was on four different medicines to prevent infections and relieve pain.  He was such a trooper - but maybe it also helped that he was promised ice cream everyday since that would be a soft food and would go down well.  Now four weeks have passed and Matthew just had his final follow-up visit with the doctor.  Dr. Akama removed the bond between the teeth and pronounced all is well.  What a miracle.  We have such gratitude for the doctor, he was amazing every step of the way, always giving us in-depth information on what he was doing, treating Matthew with respect and courtesy, and even apologizing any time there was even the slightest delay. As horrible as the experience was, he made it as best as could be expected.


Later today it was time for fun and celebration - and what better way to do it than some baseball with a friend and a cub scout pinewood derby!  Yes, we played a little baseball with Matthew's scout mate and then raced his car.  He didn't come in first place - but his car did get the award for most venomous! 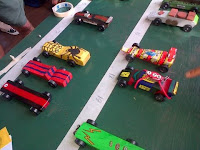