Aces or Asses at the Museum

The troop and I went to the Kenya National Museum today. I'd been wanting to check it out for a while and finally there was a day with no big plans - whether it be birthday parties, rug shopping, etc. 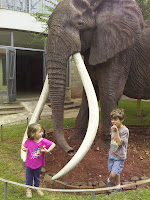 I didn't know quite what to expect since museums in developing countries generally leave something to be desired but I was pleasantly surprised.  There were many good exhibits from skulls of early humaniods to replicas of huge elephants. The museum also did a great job explaining the history of Kenya and colonialism (did you know the Africans in colonial times had to wear metal cases around their necks that held their identity papers -- essh).


The kids were pretty entertained for the most part too.  They knew next after the museum was a neighboring small zoo featuring snakes and assorted reptiles.  After a couple hours we saw there was a cafe and that was a pleasant surprise too.  Good food in a gorgeous setting.

The funniest part was Mr. Matthew.  I've been teaching him a couple card games lately - first War and now Solitaire.  You know how in Solitaire you have to move the aces up top, right?  So while waiting for our food he began a game and proceeds to announce to the whole restaurant that he had "3 asses up top!" The thing was he said it with such a straight face and loud, proud voice. I couldn't stop giggling for at least a minute to actually correct him - all the while him and Ruby don't have a clue what's up. Very funny. 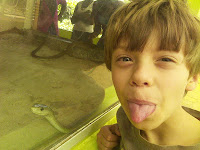 In the same complex was the snake / reptile zoo - called the Snake Park.  The kids (and me) had a ball seeing probably at least 20 different types of snakes - vipers, cobras, black mambas, pythons, puff adders, etc.  Also on hand were some huge turtles, foot long lizards, full size crocs, and giant snails.  Good stuff!  Next time we have to go back at feeding time!
Posted by Michael at 3:29 PM