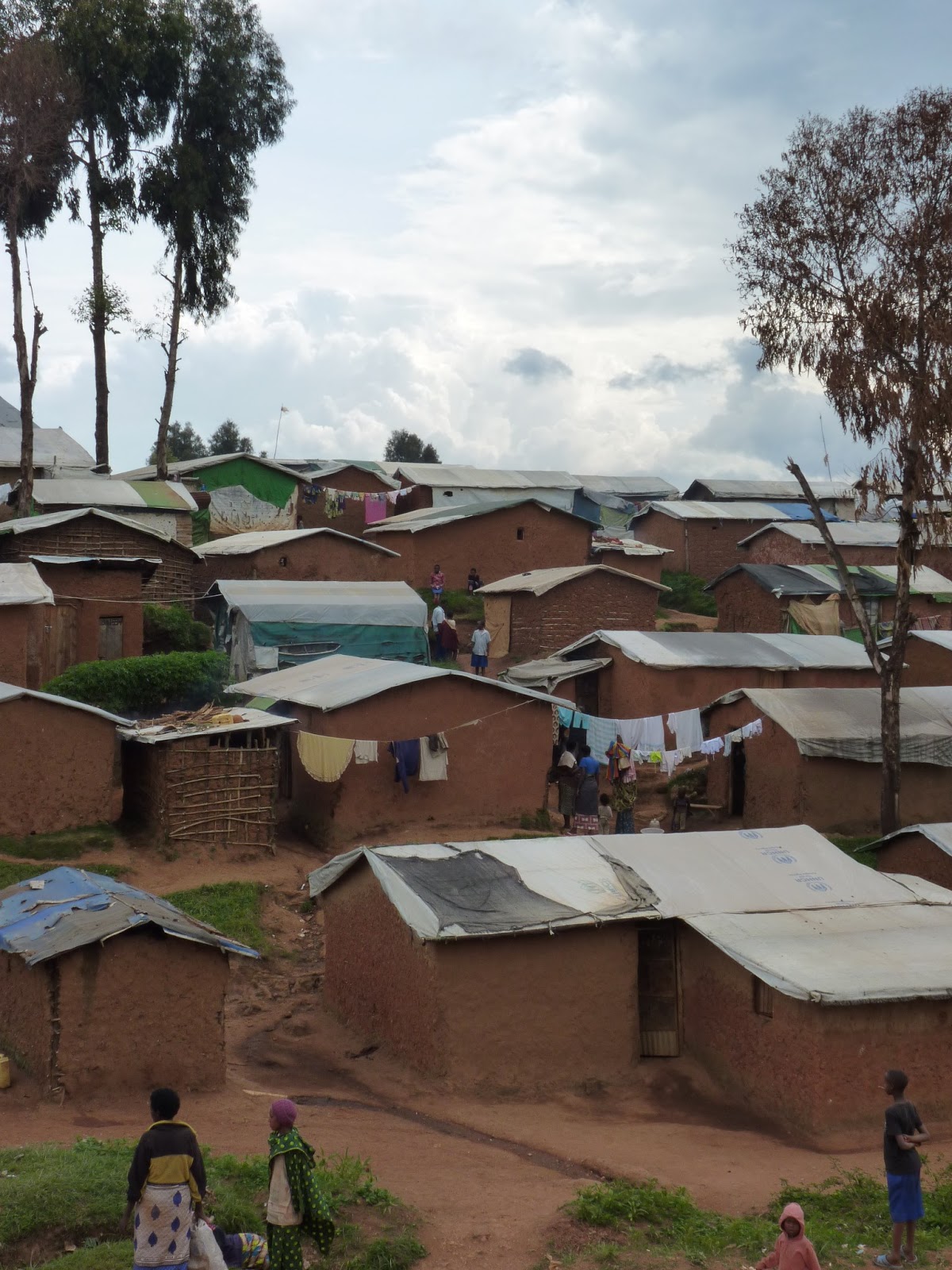 The initial 10 days I spent in Gihembe Refugee Camp were long.  Our schedule was laid out well in advance with information sessions and assessments for refugees being considered for the ESL Pilot, and training for the two refugee English instructors.

The schedule was already packed without accounting for the countless logistical hurdles that came up. It was unbelievable. For instance, we hadn’t anticipated how involved it would be to sort out which pit latrine we could use so that we wouldn’t have to use the main refugee latrine in the camp, which was, well.. repulsive.  I’ve never been so happy to be able to use a pit latrine in my life when we charmed the medical staff into letting us use theirs.  We were almost displaced twice – it just went on and on. But, we persevered, and the project start-up proceeded on schedule.

Byumba isn’t exactly a cosmopolitan center. So, the food options were limited. Even eating at the nicest hotel in town leaves my stomach unsettled. Working in the camp means you have to think ahead and have food with you for lunch. Luckily, I had brought some peanut butter and jelly from Kigali, which was good for a couple of days. Still, it gets old, and the wax paper bags just don’t do the job of keeping bread from getting stale (despite the noble environmental efforts that prompted the banning of plastic bags).

So, I was just a little hungry most days – probably nothing compared to the people living in Gihembe. And, no matter how much I tried to keep clean, the camp is unbelievably dusty. There’s no running water for washing hands. Even if people want to be hygienic, there’s no means to do so.
Children were fascinated by us, and it was a joy to reciprocate their greetings, shake their hands, help them with their basic English (they do learn English in primary school – a recent development in Rwanda). Nevertheless, “Mazungu – Mazungu!” got old quickly.

There was one particularly distressful moment when we drove out of the camp at lunchtime, which happened to coincide with when school was getting out.  As we drove through the only narrow road that left the camp, a sea of young children in their blue school uniforms were in front of us and around us – so much so that we could barely drive. Of course, as soon as the children realized there were white people in the car, they began the familiar shouting “Mazungu!  Mazungu!”, trying to get our attention.  But, many also ran as fast as they could to keep up with our car. We were terrified they were going to slip and fall and get run over by one of our wheels. One child even opened the door (lesson learned on locking doors), and it swung open and almost hit people as the car rolled forward. 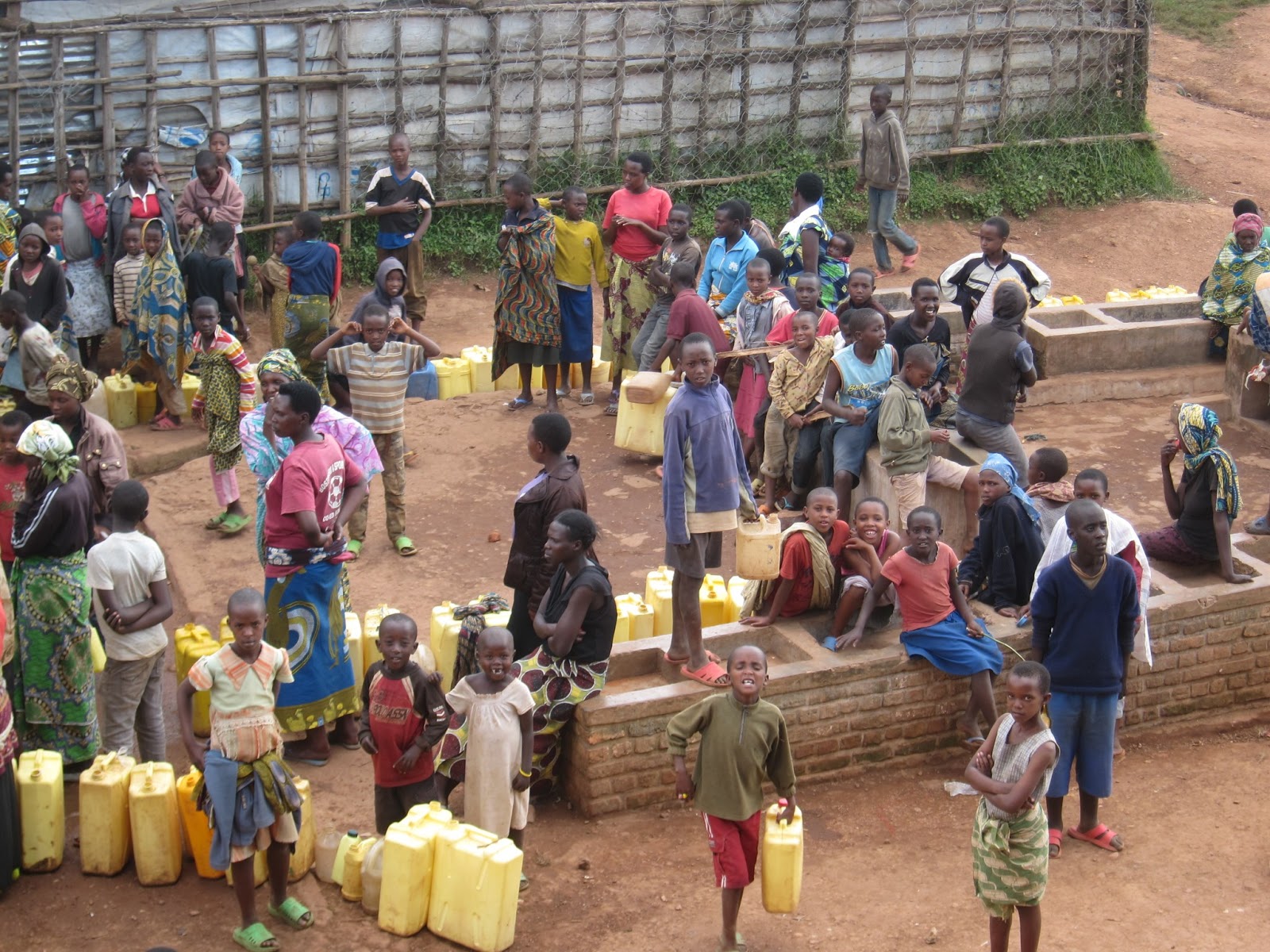 Another interesting part of camp life was the water spickets. Only twice a day are they turned on, so people line up with their empty yellow plastic containers at these critical times. The lines were long, and it was mostly women and children waiting there and carrying those heavy containers back home. Children as young as five or six would haul 5 gallon water jugs on their backs with a long piece of fabric secured around the forehead and underneath the bottom of the container to keep it secured.
Our classroom was right next to the water spickets just up a hill, and I found it fascinating to watch the rhythm of everyday life played out at the spickets. There was a Mama nursing a baby on line. She then passed the baby into the fabric sling of another woman’s back so she could return to the task at hand of waiting for water. The woman now with the baby on her back walked off.  I wondered if the woman with the sling was an Aunt or a friend or what the relationship was. The two women worked together so seamlessly, it was almost hard to tell which woman was the mother.

For the ESL Pilot, we selected those refugees approved to resettle in the U.S. with the lowest levels of English. Out of 45 students, 7 were completely pre-literate (never had any education and couldn’t read or write even in their native language of Kinyarwanda). Interestingly, it was no coincidence that many of our lowest level students were older women – a good litmus test to show who gets left out of educational opportunities in so many parts of the world.

We had invited the “primary applicant” of any case to participate. Sometimes this was a man and sometimes a woman. It was especially enlightening to have an 83 year old woman (the oldest of our group), raise her hand during the Q and A part of our information session. She said, “I have an old man at home (meaning her husband) – shouldn’t he be here rather than me?” I responded, “But you will need to know English, too, once you get to the United States.” Amazed by the prospect that she should matter, she just laughed and laughed as if the idea was preposterous. I guess she accepted it since she had perfect attendance for all 4 weeks of class. 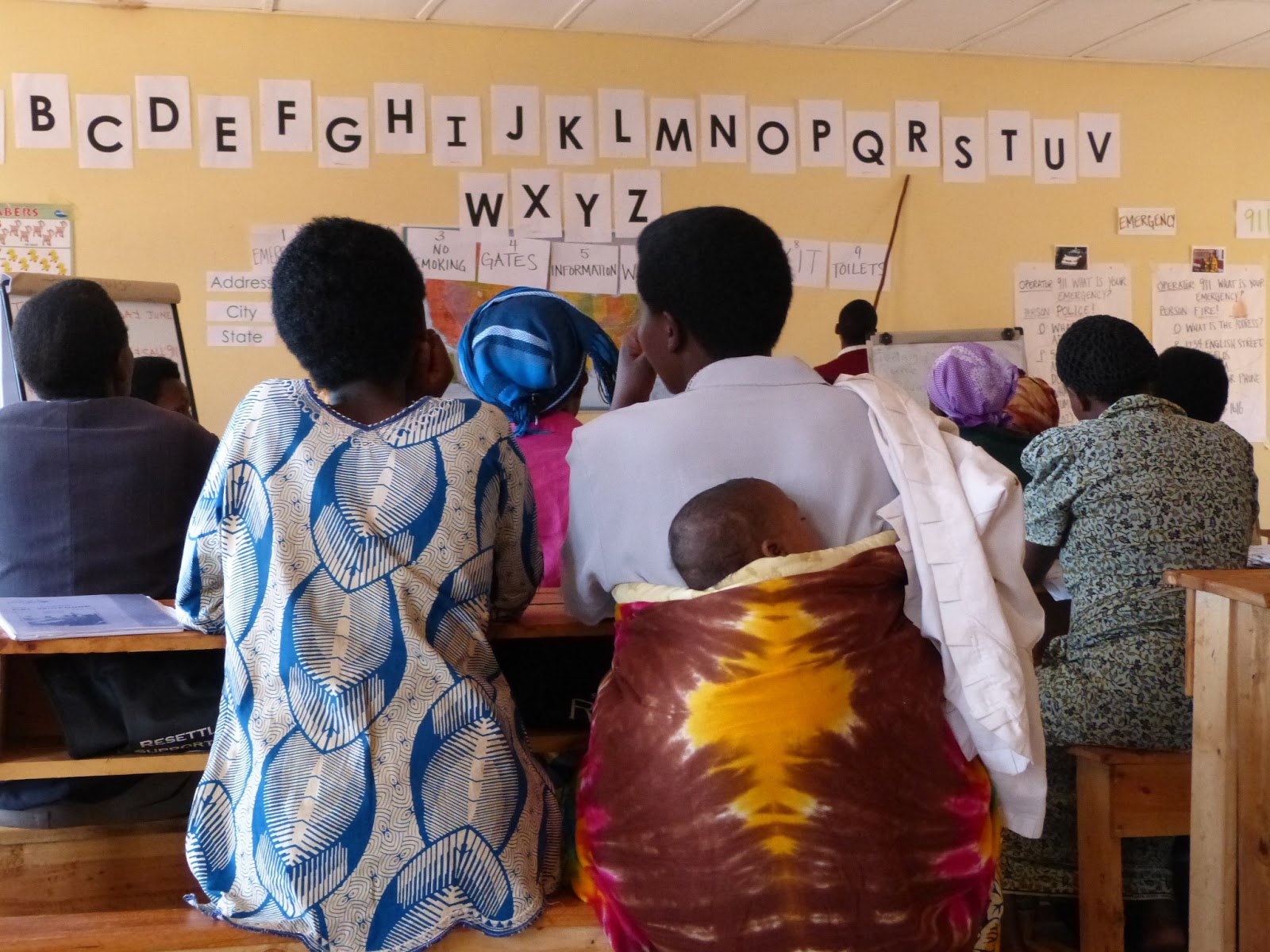 The class got off to a good start. There was such joy in that classroom. Students knew that this opportunity was rare and that English would be vital to their success.  They so want a good life – a new beginning. They took class seriously and found an oasis of mental stimulation, comraderie and enrichment – apart from the monotony of camp life. My background is not in education – it’s never been my issue, but I came away with a newfound appreciation for how transformative education can be.
I was able to return to Nairobi knowing that all was in place.  Of course, I also had a revived appreciation for the variety of foods I can eat in Nairobi and the pleasure of a hot shower whenever you want it. Even in Nairobi, we’re spoiled.

Just two days ago, I returned to Byumba in time to attend the last day of class. Everyone could say “Good Morning.  How are you?” – “My name is Immaculate. Nice to meet you.” Most could tell the 9-1-1 operator what their emergency was and give him an address and phone number in English. We’ll do post-class assessments over the next couple of days to really evaluate the Pilot’s impact, and then we’ll have a graduation to celebrate. Even the 83 year old woman who’s had a much harder time progressing with literacy and numeracy – she’s got a lot to celebrate. Maybe she finally sees that the world hasn’t forgotten her - that we believe in her.


The strangest part of seeing the community in Gihembe is imagining these same people in New York. It’s a different universe all together. I just hope people can see her for who she is and all she’s overcome – beyond her race or her accent. I see now how hard it would be for most people to have any clue of all that she’s experienced.  Maybe that little bit of English will be a small beginning to bridge the divide.