Kibera, a visit to a slum

In my new job I am responsible for a number of administrative functions in my agency, today though I was offered a chance to experience first hand some of the on-the-ground work the agency does. A trip to the field was scheduled to see how a parenting education program is helping improve the lives of Kenyans who live in informal settlements (this is the polite term for slum).

Our destination was Kibera - which so happens to be the largest in the county. It is estimated to house roughly a half a million residents. The alleys are rutted dirt roads with open sewers where sidewalks would normally be. The houses are mud-walled structures with tin-roofs. I knew this all already from reading about it and driving and cycling on the outskirts but I had not yet been inside the actually settlements. It is not recommended to enter unless you are with locals and have an escort. There are also some slum tours but it seemed odd to do that since it feels vaguely exploitative. Going on behalf of my agency was going to be my chance. 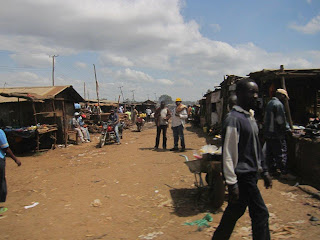 I first thought that maybe the security issues might be overstated but our driver said before we go we would need a security briefing. At the office the agent said we would need an armed escort.  I still thought that since we are with the government maybe there was just an abundance of caution. Our first stop was the local "peace officer" where we would meet the partner NGO that would bring us to the program site. Meeting with the peace officer was fascinating, he explained that the locals do not at all trust or respect the police and actually run away when they see them coming.  His position is actually a liaison between the police and the residents.  He was born and raised in Kibera and after the post-election violence in 2007-8 his department was formed to bridge the gap between the citizens and law enforcement. Certainly it seems it has been successful since there was peace after the March elections this year. Incidentally the peace officer also questioned if we had an escort since our destination was not secure - allrighhtty then, guess we'll take the guards! 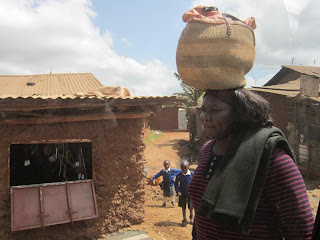 After picking up the armed escort we entered Kibera itself. The roads quickly turned into rutted paths and the density of housing and shops increased exponentially. After bouncing along for about 10 minutes we ventured down a side alleyway into the courtyard of the school where we would learn about the program. We met the facilitators and parents and heard from them how the program has impacted their relationships with their children. What really struck me was how similar their concerns were with middle-class American parents. The curriculum was designed to give them tools to communicate with their adolescent pre-teens by starting to discuss drugs, alcohol, and HIV/sex. I was thinking I hope this is offered in the US when my kids get to be 12! The parents were so thankful for the program and praised how improved their relationships with their kids were now. They also mentioned how academically their children improved as they became more responsible and listened better. 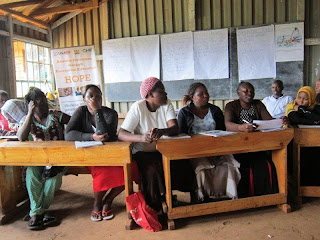 What was different between this program and what it might look like in suburban America was two things. 1) The percentage of fathers to mothers taking part was huge, out of hundreds of mothers only a tiny % are fathers. In the class I observed there was 18 moms and only one dad. Seems dads are not as present mainly because of the hours they need to work. Typically many are security guards who work 12 hours straight, six days a week. 2) Occasionally they have issues with attendance, examples the facilitators gave were because water was scarce and everyone needed to trek across the settlement to the water trucks and also when food rations were being distributed and they needed to wait in collection lines.
﻿ Something else that stood out was the diversity of parents in the programs. There were both Muslims and Christians taking part and they all joined in the prayer that both began and ended the class. The day was a unforgettable experience and the perfect chance to meet Kenyans who make a majority of the population.
Posted by Michael at 3:52 PM