For a totally different Nairobi slum experience, Way and I took the kids to a music and art festival at the Railway Museum yesterday, the Slum Drummers were going to be playing.  I wasn't quite sure if it would be a kid-friendly event, but what the heck I thought, we'll see how it goes.
﻿﻿
We were probably the first to arrive at about 4:30p and they were still setting up and the organizer told us the kids would have to leave by 7pm since alcohol would be sold. After a couple minutes milling about it became apparent this whole event was going to be more of a dance / rave festival than anything else. BUT I wanted to see the Slum Drummers do their thang and I DID want to get a taste of the nightlife, even as just an observer who would have leave before the party really got crazy. 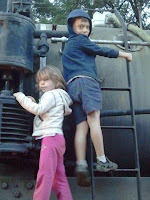 Finally after many hours of hanging out, climbing on the old steam trains, and checking out the scene, the music started and the slum drummers were the third act.  They didn't disappoint: about a minute into the video they step it up a notch with dancing...


We left Way there and he certainly made the most of it - he made new friends and had a great time - good for him!
Posted by Michael at 4:55 AM