No consistent Internet access here - so here's the latest updated while we can! Wrote these every night but posting in one post...

Relaxing
Our first full day in Italy was notable for what we did not do – we didn’t rush around, we didn’t see art, we didn’t drive long distances, we just took it easy and let the day develop. Our place in Tuscany serves breakfast and we wandered over to a scrumptious spread of fresh fruit and yogurt, breads, granola, etc. 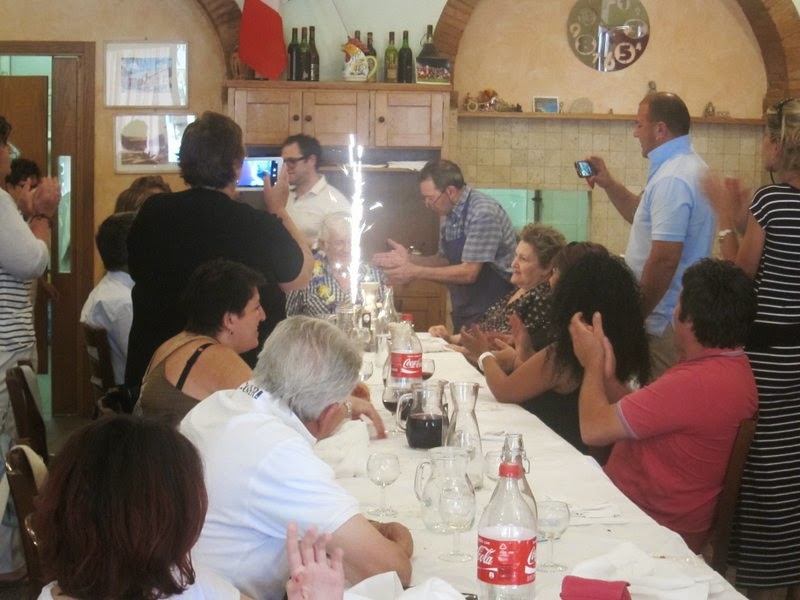 After another lazy couple hours it was time to find some euros and before we knew it was past 2pm and the troops were hungry for some true Italian pizza. This was more difficult than we imagined since it was Sunday and many places were closed – but finally we discovered a place and it seemed quite authentic as it was hosting a large birthday party for an older man and his extended family.

Next we thought it would be nice to find a pool and thanks to our car with GPS we got there quickly and easily. The kids had a blast running, jumping, and swimming to their hearts delight. At the end Matthew and I teamed up for a World Cup soccer match between us – the Americans and them – the Italians. No doubt who won! 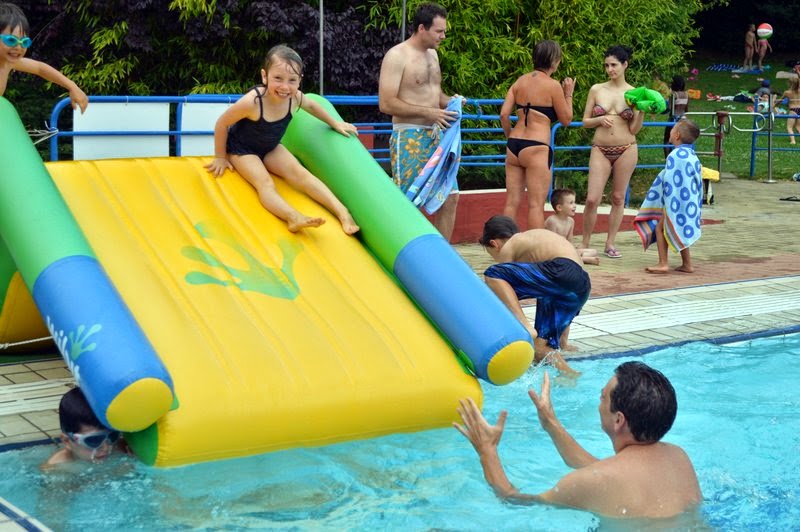 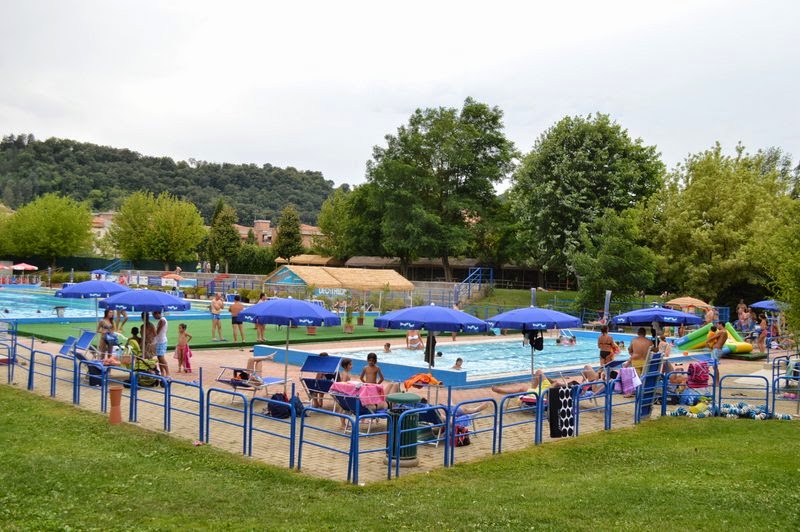 Our final goal for the day was to find Internet access and GPS came through again and directed us right to an Internet café where, while mom and dad got some business taken care of, Matthew cheered on with the Italians the Dutch win over Mexico – I guess Europeans stick together.

Today was back into the mix of being a tourist. After a relatively no-nonsense morning we were on the road for what should have been a less than 40 minute drive to Florence. Within 5km of town though we hit bad Nairobi-style traffic for at least another 30 to 40 minutes. Ruby was taking a nap though so we knew the downtime would pay off later.

After quickly finding parking we hopped on-board one of those double-decker style tour buses for a overview of the city.

With kids in tow they are great as you get a high-up view of the whole city and there is no whining about walking all over the place.

About an hour later we got dropped off in the city center and wandered in and out of piazzas ohhing and ahhing over the medieval buildings, palaces, churches and the such. We weren't really into any museums but we did venture up 463 steps to the top of the famous Duomo in the center of town.
The kids did real well climbing, so kudos to them. Delicious cones of gelato were a well earned treat afterwards! Next we spent some time admiring the Renaissance and Roman sculptures in Piazza della Signoria’s Loggia dei Lanzi. The size, dimensions, and realism are quite awe-inspiring. 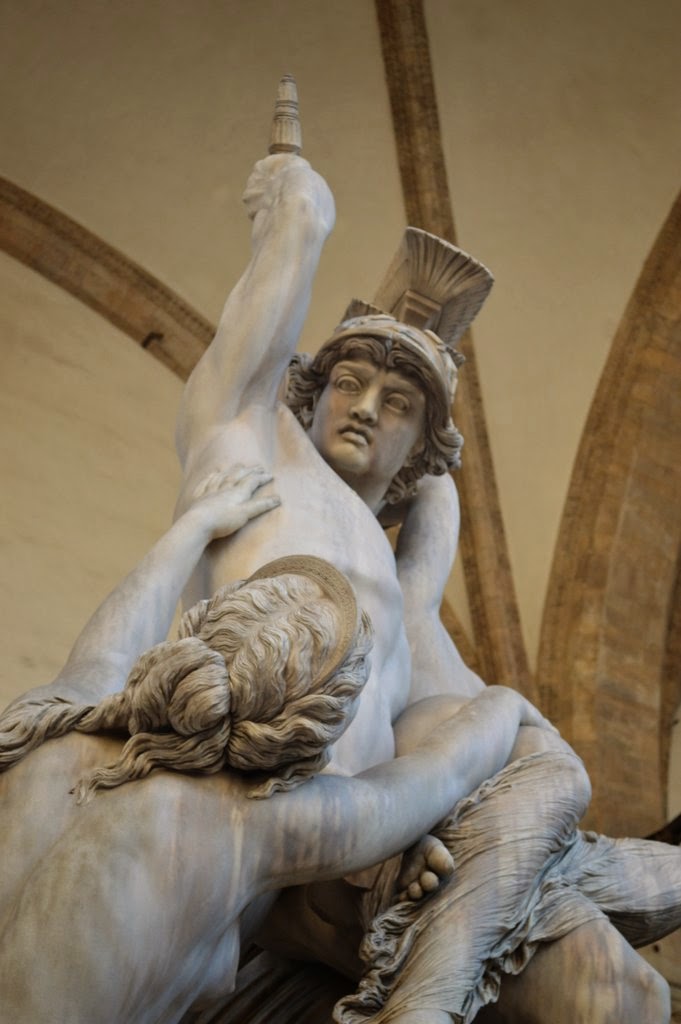 After a quick jaunt across the famous bridge Ponte Vecchio we enjoyed a satisfying dinner at a comfortable trattoria in Piazza Santo Spirto.

Just one note on the awesomeness of GPS. We lucked out in that our rental car came with it installed and what a blessing – I can’t imagine getting into and out of these cities and villages and finding some of the attractions we have visited without it. It has saved us hours of aimless driving and confusion. As someone who loves to find his own way with just an old-fashioned map I was a tough convert but now I’m sold!

Twice a year there is a well-known festival in Siena called Palio, whereby the different neighborhoods compete via a horse race and pageantry.

We heard it can get a bit hectic so we decided to go a day earlier so get a feel for it but miss some of the craziness. During our visit to the town we were impressed with the large medieval town very much still alive and full of life and there was an air of anticipation for tomorrow’s events.

Later in the afternoon we stopped by a nearby burg called Monteriggioni. This small village is fully encircled by high medieval stone walls, we had a good ol' time climbing among them and eating gelato in the piazza.

Back to the Palio in Siena

After some deliberation we decided to at least try going to the Palio – heck it’s been held for some 600 years – what do we have to lose? First challenge was trying to find parking – imagine trying to find the perfect spot on the LES on a Saturday night. After a quick jaunt around town we did find a parking lot and we were good to go from that perspective. Then we ventured up the walled old town and found a comfortable spot to wait for a couple hours for the festivities to begin. Rhonda went off with Matthew and did a tour of the Duomo and Ruby and I people watched in the palazzo. We weren't exactly sure if we were in the right spot to get a good view of the festivities but in the end all the pageantry unfolded right in front of us. 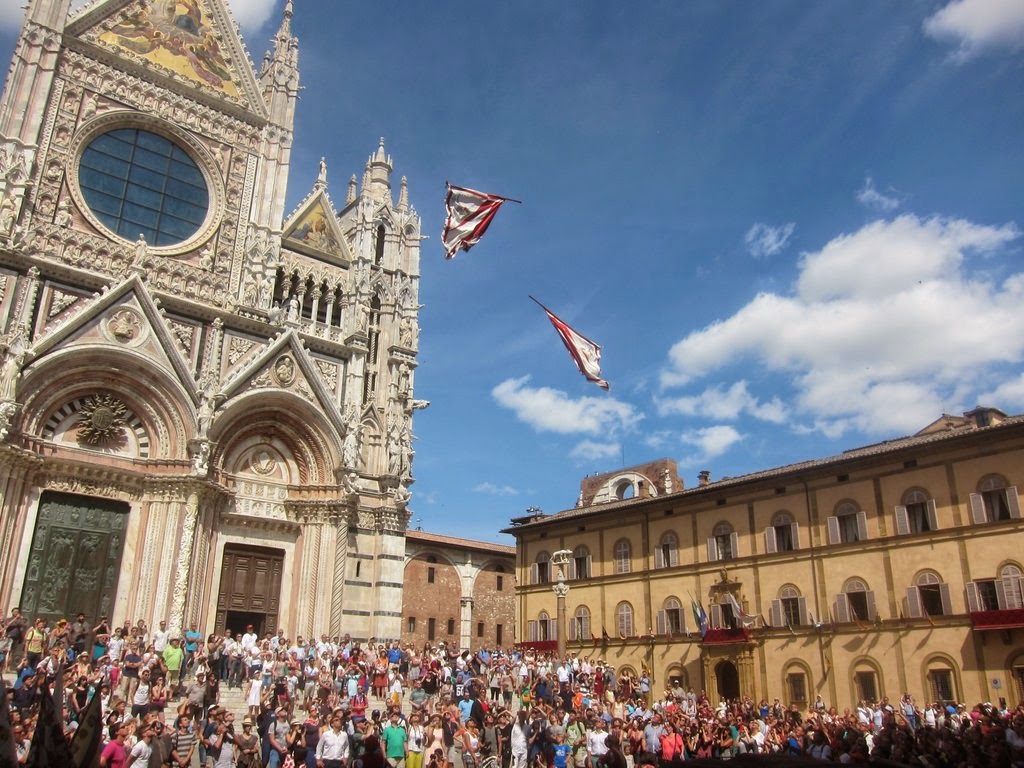 It was spectacular to watch the drumming, the flag waving, the singing and the all the folks in their full medieval regalia getting blessed by the bishop. We even joined in the festivities by buying a flag from one of the contrade (neighborhood associations).

Our next stop for the day was village of San Gimignano. Famous for its 13 tall stone towers from the 1300’s it was a pleasant place to grab some dinner (the kids of course had pizza for the like the 5th meal in the row!) and some gelato on the piazza.